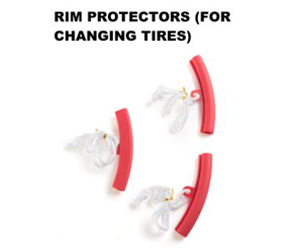 BigPantha Rim Protectors Set of 3 Including a Carry Pouch

OK so who likes to change wheel tires? Not many people that’s for sure, but if your going to have to do it then you might as well do it correct – and using the right gear so that you don’t damage your rims using a decent set of rim protectors makes a lot of sense!

Enter the BigPantha Motorcycle (or Car) Wheel Rim Protectors that will guard and shield your wheel rims when using tire changing tools.

Protect Your Wheel Rims! Slips between the wheel and tire to protect your wheel rims from being scratched or damaged by tire changing tools such as tire levers.

Hassle Free Use! Cords attached to the Rim Protectors in order to enable easy retrieval should a rim protector falls into the tire whilst being removed.

Super Tough! Many Rim Protectors don’t last more than a few tire changes since they damage easily and fall apart after use. These new longer lasting BigPantha Rim Protectors are made from a super tough Thermoplastic PolyUrethane (TPU), which is more durable than rubber, PVC or plastic!

Never Lose Them! Comes supplied in a convenient to use Carry Pouch – for protection when not in use, ready storage, and easy access. Slips into your tool box, or your pocket equally well.

Changing tires on your vehicle is a bit of a pain, and the risk of accidental damage to your pristine Wheel Rims from tire changing tools such as tire spoons / irons / levers is not to be understated.

Your BigPantha Rim Protectors fit onto your motorcycle (or car) rims one at a time which means that you can safely apply leverage to rim to remove the tire without fear of damaging your wheel rim.

We’re included a total of three rim protectors simply because two is not always enough!

Use time and again – made from especially developed and extremely durable TPU. Which basically means that your BigPantha rim protectors, unlike some other brands, can be used multiple times without breaking or wearing out.

Check them out on Amazon

Would highly recommend – Very well made and resilient!

“This is my second set of rim protectors and I have to say the set I purchase from BigPantha are far better than my previous set I purchased from another major manufacture which split/cut during the first use. The BigPantha Rim Protectors are holding up very well after two sets of tires under the stress of tire irons on stiff sidewall ADV tires. Also the free storage bag is a nice touch! Would highly recommend and buy again.“

“Worked like they were intended to. I was rebuilding my motorcycle and powder coated the aluminum rims. These helped me keep from scratching or nicking the finish when I was remounting the tires. I’ve used them several times in my shop doing bike tires for customers and they’ve worked on every type of rim.“

Tougher than they look.

“This definitely helped with both getting the tires off and on. I was a little worried they would not stand up against the pressure I was putting on them with the tire irons. They are tougher than they look. They protected the rims well. Not a mark on them.“

“The protectors worked as stated! I was impressed with them and I will be using them whenever I do further tire changes on my GoldWing. Thanks!“

Very happy with these.

“They worked great. Saved me from marring my black rims while replacing the tubeless tires.“

I have a 2007 Yamaha FJR and they worked great. Easy to use

“I have a 2007 Yamaha FJR and they worked great. Easy to use, once you have a pattern of how to set them up/space them in your process. I recommend.“

“They clamp onto the rim just like their supposed to and they don’t slip under pressure.“

“Work very well, add have held up. The strings make it much easier to fish them out of the tire, and I actually found the string attachment tags a handy spot to grab them to slide a bit along the bead. Would buy again.“

“Arrived on time and as described. The product works very well protecting the rims. would buy again.“

“Just what I needed.“

“Must have for scratch free installs! Love it“